This particular White Paper is not in any form a professional answer to any or all the questions about Bigfoot, or as some people have heard me refer to them as a "Type of People", but truly are they a type of "people", some scientific research projects can trace certain aspects of DNA from suspected Bigfoot evidence that they have a connection to our DNA. This White Paper is not going to hold any scientific evidence as so called "truth" to their identity. The purpose of this White Paper is to ask the questions that very few want to ask and attempt to point the reader to his/her own conclusion. This investigator learned early on in his career that everyone has their own definition to who and what the Bigfoot really are. But is any of them correct? Maybe, maybe not! The whole reason most people get into this field or hobby is to prove they exist and to identify who and what they are. Some people get into this because they saw something in the woods or on the side of the road. Curiosity is what humans have that gets them into trouble most of the time. Why does it drives us crazy to get others to believe what we know, why is it our passion to get others to believe that Bigfoot exist? Some really do not care, but why do some people get so angry that some do not believe and some do nothing more than laugh and ridicule our belief's?
Chasing Bigfoot: What will it get you?
Answer: This is particularly a difficult answer for some people to hear. Humans want to know about something, they examine it, they test it, they break it down, they blow it up, they put it in the lab for testing, they go out and research it, they.....this could go on for days. The point is, we as humans are curious by design, we have a mind that wants to know how, what, why, and what for. Bigfoot is no exception in the fact that we want to know everything about who, what, and why Bigfoot is real or why they exist. I once heard a tribal elder say "God created the universe, he created the stars and the moon, and people, did God create a book to teach us how it was made or why, do not challenge the creator in his creations, accept the creation, give thanks to the Creator and go on with your day".

I think what is being said here, is they exist as we do, if you were not handed a manual for the how's, why's, and how come's of what was created then accept it, give thanks, and carry out the rest of the day. I will not get in a deep discussions of the Bible, I know not everyone believes in God and what the Bible say's. I will say however there is many deep and sometimes "heated" discussions about what the Bible say's about "tall hairy people" of long ago. However related to this particular article is that we sometimes chase things that keeps us curious and sometimes we get side tracked and think of nothing but the chase and the target of our pursuit. Boil down to our belief's and what chasing Bigfoot will get you. It has been that some of our investigative staff have come to realize over a 8-10 year period that Bigfoot/Sasquatch is a spiritual being, which is of flesh and blood. However just like us humans we have a spirit and we are of flesh and blood. But when it comes to the "taller hairy" people of the mountains and forests then your chasing something (Bigfoot) that is said by some, that they are much closer to the spirit world than we are and in some instances that you maybe chasing something that doesn't want to have nothing to do with you and you may get "more than you wanted"<<< You will see this again.

I am not trying to go into "hokus pocus" or "witchcraft/voodoo" stuff, through some of our own experiences and well as hearing more than half of our witnesses, reading other accounts from all over North America and one instant from a foreign witness. We have come to a conclusion that there is a mystery of what evolves around the Bigfoot/Sasquatch that witnesses (intense encounters) experience very negative and sometimes traumatic events during and after the sighting (encounter).

We had visited a Indian reservation in northern Oklahoma few years ago and one of the elders often said "Be careful what you wish for, you may get more than you want" (<<<<see this again). What this elder meant was that we need to be very careful in the pursuit of our desires and flagrant human curiosity that most often puts us on a path of very negative outcomes and unwanted baggage that sometimes goes with chasing Bigfoot. I know three different people, that have lost their jobs (lifetime careers), vehicles, life savings, and even their relationships all over the pursuit of trying to prove to the world that Bigfoot exist. Two other incidents that we know of that two different people in different parts of North America have even had such negative experiences that they will never set foot in the woods at night ever again. One individual purchased more than $6,000 dollars of surveillance gear, and camping equipment, read every book and watched every TV show, not only to plan for months a week long visit and then get out to the woods, have some very traumatic experience happen and then leave all of it in the woods to never return to the site and to this day, never want to discuss what happened!  Now let it be said, these negative encounters are only made up of 3 out of 10 (in our stats) that this may happen. I know of just as many if not more than enough positive outcomes to warrant the individual to even purchase the land and build a home on the site where the Bigfoot activity is very well documented by the land owner.

What we are trying to say is, you can not be guaranteed what will happen when you go out into the woods, specially if you have never been out with a veteran researcher. Not all researchers are conducting themselves appropriately, not saying we here at the Honobia Bigfoot Conference staff are experts. We together have more than 80+ experience through trial and errors, we are just saying "be careful you may get more than you want"

Haunted forest? or Bigfoot activity?
Answer: Just as the topic above I don't want to get into the area of "witchcraft" or any "voodoo" stuff. But in regards to Bigfoot/Sasquatch if anyone has really researched witness accounts or has been doing their own field research you may have heard or experienced your own "weirdness" that sometimes is associated with Bigfoot. We will just stay to the facts in this case and leave certain areas of the "weirdness" up for another time.  Some of our field investigators have stumbled across Ghost Hunters and Paranormal Investigators over the years, they were in a area investigating Ghost accounts and Haunted state parks or heavily wooded areas. The same location where Bigfoot activity had been investigated, both were left with their own explanations. Strange sounds, screams, moans, rocks being thrown, sticks tapping on trees, and shadows moving amongst the trees. Well unfortunately that sounds like a Ghost/Haunted and or Bigfoot activity, depends on who you ask.

It has even been witness by two of our own investigator and as well as a dozen other witnesses that has seen a Ghost style image of a human being and then within minutes actual sighting of a Bigfoot near the same area. Now I am going to be very careful here, no one was transported to a "nut house" or given a psych evaluation, these events were discussed at great length by the witness and everyone that was at the location. Weirdness as it may seem, it did happen and til this day some still are trying to come to grips with what they exactly observed.

Tribal elders of some communities will tell you this "...they are of spirit, they can walk among the spirits of our time" translation, well that is sometimes misinterpreted by some people.  Other Tribal elders have said "....the old people are of spirit and of a place we can only wish to be". Some tribal people call them "the old people". The belief is that the Bigfoot are from many centuries ago and often out live us in years. Now again these are only tribal belief's and not everyone shares the same knowledge or belief's. What we can say is, that there is a weirdness to the Bigfoot that some people will describe and some will not talk about what they observed.

Not everyone believes in Ghost or Bigfoot, either way, some people will try and spend their every waking moment in the research of such phenomenon. Our advice be very careful in what you wish for...."you may just get something you are not wanting"<<<told you that you would see this again!

Conclusion: There are mysteries all over the world, some people spend their entire life chasing a mystery and sometimes come up short or broke or lonely for their efforts. You will never convince the world on something 100%. There is always someone that will oppose your efforts and your findings, that is what makes us humans. Even in our own staff not everyone believes the same as the other, but we find our friendship and our maturity that keeps us together working for the same goal......."to share with you what we know and what we do not know". 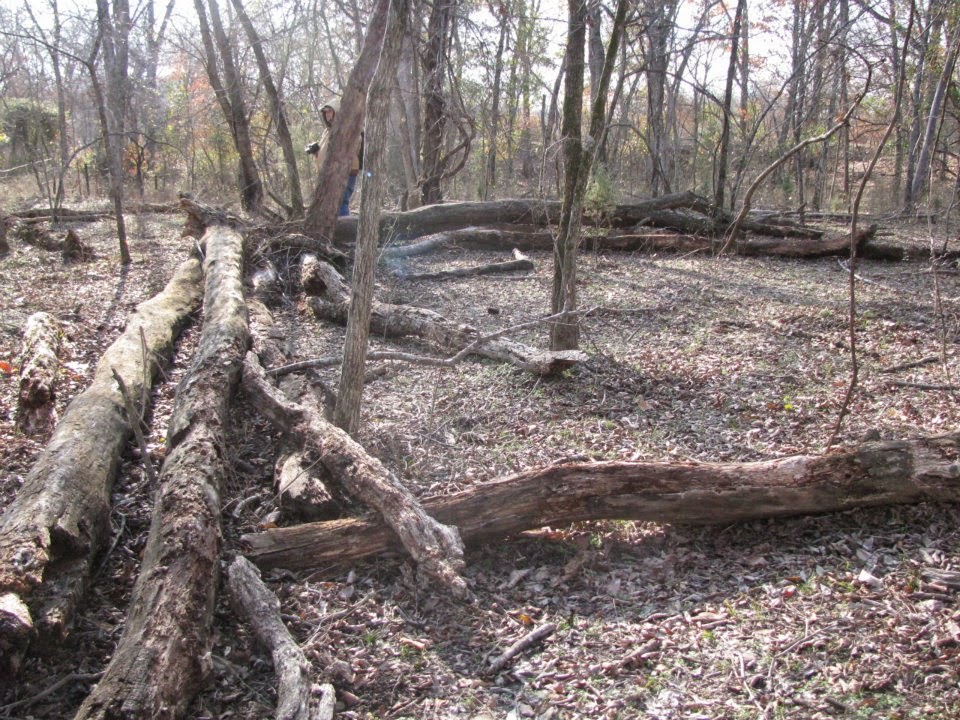 
Insert: Investigation location SE Oklahoma. Notice the faint upright blue mist to the right of the standing small straight up tree. It would be closest to the camera to the right of the investigator that is standing in the background.
More of "Part Three" to come, will post soon.﻿
Posted by honobiaoklachito at 7:56 AM

This year will be full of education, field expeditions, and preparations for the 2015 Honobia Bigfoot Conference and Festival.

Members of the Honobia Bigfoot Conference Staff have come together to produce several field expeditions both private and public expeditions within the Honobia Valley region. More information will be posted soon.

Preparations for the 2015 conference and festival will be starting soon as well, keep your eye on this blog for the latest information on what will take place this year.

There has been a lot of reports of Bigfoot activity all over the State of Oklahoma. Staff members have been busy with interviews, field investigations, and collecting data. Investigative reports will be posted soon. 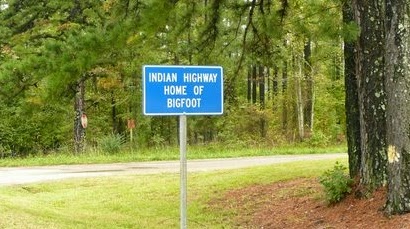 Please forgive us, we are in the field conducting witness interviews and field investigations....
STAND-BY UPDATES COMING SOON!!!﻿
Posted by honobiaoklachito at 8:20 AM