Kiamichi Mountains Adventures brings in the new year with a bang. Even though it is March, it is the first field expedition for the year.

15 people attended the March expedition from all over the US. Not only Oklahoma, some traveled from Florida, Kansas, and Southern Texas. Some attended 4 days, the amount of activity was as always difficult to predict.

The first night was a huge discovery for some, lots of eyeshine with extremely tall dark upright figures walking on the ridge line up above the main base camp. Later the next day several members attempted to re-create the size and speed of what was observed walking on the ridge line, only to discover who or what was up there was very tall and had abilities to cover very uneasy terrain and speeds we (humans) are unable to accomplish.

Second night was experienced with little less activity, however the observations of more eyeshine and dark figures moving about in the woods near the base camp were enough to spark more interest into what is really going on in the woods. Few whoops and screams were head. Later into the night after everyone went to bed, few attendees heard several screams near the locations where everyone was sleeping.

Third night several other attendees arrived and experienced their own dark upright figures, eyeshine, howls, and strange whistles near the base camp. One individual had a rock land just inches away from him, several others were standing several yards away and was witness to the event. Several heard loud screams and one moan after everyone turned in for the night. The strange whistles were the highlight of the night. Several attendees on this trip have remarkable outdoors hunting and field experience. They could not come to a conclusion on what or who was making the continuous whistling sounds. Group of 10 were attempting to start a small fire at a remote camp when a low but very audible growl was heard by half the group. Two young ladies were standing just feet from where the growl came from, immediate search of the area revealed that no bear, mountain lions, wild hogs or wild dogs were present.

Fourth night was not as active, but not to disappoint, there was eyeshine, return calls of whoops made by some of the children that attended. Couple of rocks landed near some as the night went on. One person placed apples on the hood of his vehicle and the next morning two were discovered more than 50 yards away from the vehicle. Unknown who or what was the responsible for the moving of the apples.

All in all a very active and educational weekend for everyone. Friendships were made and best of all everyone walked away with their own stories of what they heard and saw. 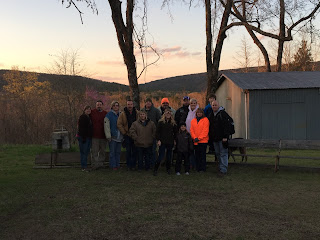 Posted by honobiaoklachito at 9:21 AM