In the summer of 2016 the tribal liaison for the Sasquatch Genome Project (SGP) was contacted by a tribal citizen that lives in Delaware County, Oklahoma and invited him to talk with some of the citizens in the area about all the Bigfoot activity they been having for years. It was decided that a small portion of the project team would travel to Delaware County to visit with some of the citizens and conduct a town hall meeting. December 10, 2016 was chosen and the location for it to be held was the Delaware County Public Library in Jay, Oklahoma.

On December 9th, 2016 several members of the SGP Field Research and Investigation team arrived and met with several citizens, the team learned that there have been Bigfoot activity in the area for many generations. Some report that some local residents have experience some rather negative behavior by the Bigfoots in the area. In more detail they are saying that some local homes are being visited by something that throws rocks at the home, walks on the deck or porch of the home, slaps the side of the home and stands outside and screams so loud that it can be heard over the TV. Some residents have expressed their concern that they are saying some do live in fear and some have no where to turn for help. Of course you could speculate that when law enforcement is called, it is not such priority that patrol officers drop everything to respond to "Bigfoot throwing rocks at my house" who would they call that would get proper response and not laugh at the home owner.

Members of the Sasquatch Genome Project that are also members of the Honobia Bigfoot Conference staff have spent countless hours responding to calls such as this, several members have investigated numerous reports such as these all over Oklahoma and North Texas.

On December 10, 2016 the SGP were on hand at the Delaware County Public Library where little more than 140 people attended, presentation was given by the tribal liaison and field investigator Troy Hudson, brief history and current status of the Sasquatch DNA project was given, along with long-term investigative information that comes from tribal folklore and customs was also heard.

There has been an overwhelming request from some of the people in the community of Delaware County that members of the SGP have been invited back and will continue to work with the citizens of the community to better understand what people are experiencing and possibly come to a mutual agreement on how to handle what is going on. 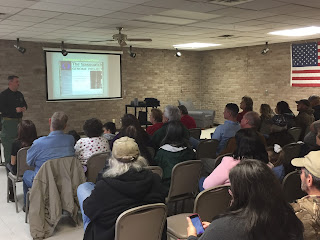 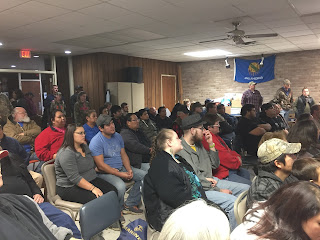 Posted by honobiaoklachito at 7:31 AM