The first fall 2016 field expeditions got under way the last of October with one heck of a weekend. There were little over 10 people in attendance.

The first night was absolutely unbelievable even by the expedition's guide's expectations. The group traveled to their destination and within minutes there were sounds that most could not identify as to what animal or "thing" were making the sounds. One person reported seeing what he described as a small red light within meters of the base camp's position. The group split into several small 2-3 person teams to travel the cleared paths in the woods nearby the base camp to see what was roaming in the woods. Note: the group travels to these areas via 4 wheelers and side-by-side ATVs for ease and to scare away most critters. It is easier to identify sounds in the woods as to what is not making the sounds specially if the deer and other small varmints are scared off by the sounds of people in the woods. Typically most depart the area to leave only the expedition attendees and "visitors" creeping through the woods.

About an hour into it, just about everyone in the group reported seeing large up-right "man-like" figures approaching from various directions, one small group was charged at from estimated distance of about 10-12 feet, it was bi-pedal and moved very quickly, it moved off to the side of the group and remained there for some time. Several other group members said the could see head and shoulders about 7 feet off the ground in the same spot as to where the sound had stopped moving. Two hours later several small groups were attempting to find each other in the rather dense forest. One two man team was charged again by something very large and bi-pedal this time it moved to within feet of them and again moved off to the side and stopped.

The nigh finished in array of sounds, whoops, screams, and whistles, even one sound veteran expedition guides were unable to label as to what it was or what made the sound.

The second night was just as impressive as the first, all though no "bluff-charges" as some call it, but the night was filled with audio sounds both far and near, eye shine was the highlight of the night, rock throwing as something was hitting the top of a old well building near by causing some to jump from the rather quite to "bam" as rain of rocks fell. Two members were lucky enough to see several small up-right figures just yards away moving about in the woods. Husband and wife team observed very large figure with eye shine move away from them, estimated to be little less than 15-20 yards away. 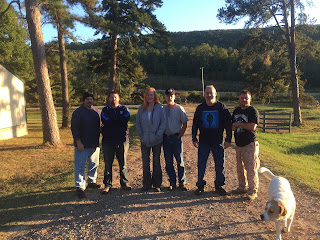 Posted by honobiaoklachito at 8:54 AM