This expedition proved to be another worth wild trip. Specially for 7 newcomers to the Kiamichi Mountains Adventures (Sasquatch Expedition). The temperature on the first night were a little chilly. Not much activity other than some small rocks being thrown near some of the attendees. Couple of attendees observed very large upright shadows moving about several yards away in the timber. One whistle was heard at close range back at base camp.

The second night proved to be the deluxe expedition package. A different location was identified by some of the attendees for their group investigative site. This location is only described as a darkened area of the forest where hardly any lights or stars can penetrate the canopy of the trees. The group was broken down into different base camps. The first group a party of two was on sight for little less  than 30 mins when extremely bright eyeshine was observed (est 150 yards away). Multiple sets of eyeshine began to appear coming down a ridge line meeting up with the first set of eyes. The second base camp group was summoned to this location where everyone had the opportunity to observe the eyeshine from different angles. The estimated number of individuals (typical Sasquatch behavior) with eyeshine were between 4-6. Hard to count the exact number of them due to the eyeshine moving about so quickly. Movement was also seen by the way of shadows very close to the group (est 50 yards away).

Numerous strange sounds were observed, one good very close proximity "whoop" was heard. After returning to the main base camp, several members conducted discreet surveillance where number of eyeshine and tall large dark figures were observed back in the main base camp area. More information will be added soon as all attendees submit their own reports. 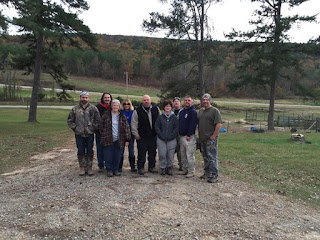 Posted by honobiaoklachito at 10:21 AM

Lance West from KFOR Oklahoma City Channel 4 drove all the way from OKC to visit the Honobia Bigfoot Conference and Festival site. Here is their story: 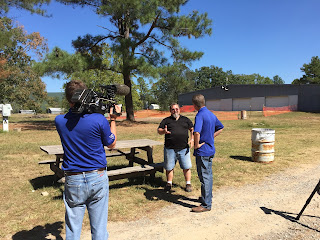