We are very excited to announce another great speaker giving a presentation at the 2016 Honobia Bigfoot Conference, Tim Harjo!
Tim Harjo is Native American (half Chickasaw & half Seminole) and possesses an extensive knowledge about the cultural beliefs, practices and Native ways of life. A large portion of this knowledge and insight was taught to him by his grandparents while growing up in rural Oklahoma. Tim was raised and taught in the traditional ways of life of two Native Peoples. In addition to speaking both the Chickasaw and Seminole languages, knowing history and stories of the two Nations, being an expert tracker/hunter, bow & arrow craftsman, drum and flute maker/player, etc.; Tim also discovered he had been gifted a natural ability to help others in the capacity known to many as a Spiritual Healer or Medicine Man. All of these things combined finds Tim being invited to various events and gatherings all over the U.S. Some of these travels is from Tim being a member of a Native American dance troupe, "The Chickasaw Dancers". A chance encounter with a "Tall Man" (Bigfoot) during childhood has led Tim down a path his whole life to experience and learn more about these mysterious people living in the woods. Part of that journey found Tim involved as a member of the popular TV documentary titled, "Bigfootville". Tim now enjoys sharing what he has learned about Bigfoot along his journey down this path and providing insight and behind the scenes stories surrounding his involvement in the filming of "Bigfootville". 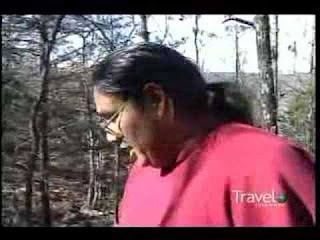 ﻿
Posted by honobiaoklachito at 7:32 AM